Owning an old house comes with certain responsibilities, at least I’ve always felt that way.  We are currently responsible for two, each in a vastly different time period.  The newest one was built in 1840.  As you know the house at Fort Pelham Farm was built around 1800.

Over the years I’ve done research about its past occupants – more or less a genealogy since it remained in the same family until 1941 with the sale of the house.  It’s easy to make assumptions about why the house left the family.  Olive was the last child of a long line of occupants and with no children of her own the ownership would eventually leave the family anyway. 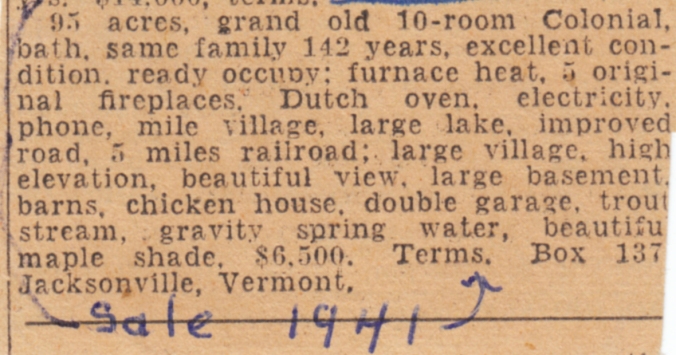 Olives parents had moved away from farming for the most part by the time the property went up for sale.  They were taking in borders who enjoyed the summers in Rowe and were also feeding people their chicken dinners – a sign for that remains in the museum.

Olive died in 2001 and two of her photo albums made their way back to Rowe.  I scanned each page that she had lovingly put together and it was easy to tell what a loss the sale of the property had been to her.  There was such great pride at being part of that family history.  She had marked almost every photograph and written her family history on the back of one.

As anyone who has owned a house of this age knows the upkeep on a house this age can be overwhelming at times.  For me one of the biggest challenges is how to keep the historical aspects of the house while maintaining its livability.  No easy feat.  More often than not the only thing you have to go on is research on other homes built around the same time period, some old photographs and the knowledge of historians that have gone about the restoration of other properties like yours.  For me there have been a few aha moments – one of which was the albums resurfacing.

There were a number of photographs taken of the interior of the house showing various furnishings and how they were set in the living room. 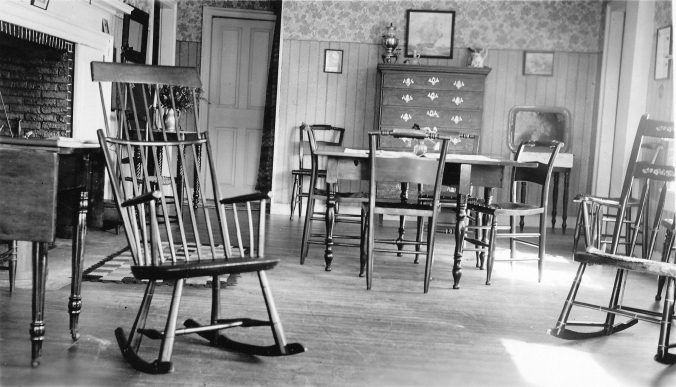 After looking at these it kind of sent me on a mission to find similar pieces into order to fill this room as we renovated it. 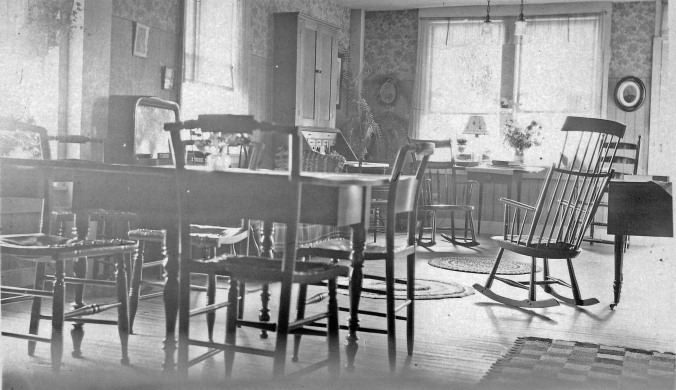 Any reader out there that is remotely engaged with antiques will readily recognize that without an unlimited budget this was never going to happen.

A few weeks ago there was a message on my answering machine from a man who told me he had furnishings that originally belonged to Pardon Haynes family.  When I called he explained he was the nephew of Olive’s through her husband and had inherited her furniture when she passed away.  He felt the furniture and other belongings should make their way back here thinking that Fort Pelham Farm was part of the Rowe Historical Society.  He was having them appraised and then would donate them for the tax write off.  I told him I would pass the info along to those who could help him.  When I did I found that he had already contacted someone at the museum.  I was relieved.

In talking with a couple of members of the society the excitement about this donation was palpable.  I cannot wait to see and touch these things.  I feel like there would be some sort of unseen connection to the past.  The spirits of this house lived with those things, used them, treasured them, passed them down.  I know they are inanimate objects but having lived in this house I know it’s the way it is because of the people who have lived here.

I do know that space is tight at the museum and offered to keep furnishings in the house they originated in – willing to insure and keep the house open to anyone that wanted to view and study them.  One woman said the museum could always sell them.

So at this point I just hope someone will let me know if and when they arrive so I get a chance to photograph and study them.  And touch and imagine what they might have looked like in the very room I’m writing in now.