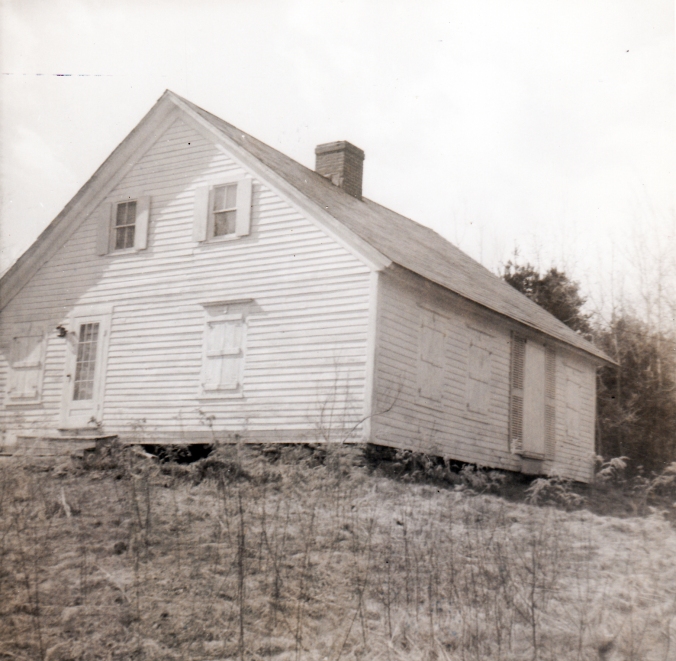 This is the house my family moved into in 1961 when we moved to Rowe.  My father was working at Yankee Atomic and there were more than a few families that moved into town with the opening of the plant.  We had just spent the past year in Buckland in a house that I remember being so cold the only room we spent any time in was one with a wood stove.  That says something because I was 4 years old at the time.

When I look at the photographs of this house on Potter Road I always wonder what they were thinking when they decided to buy this place.  At the time Potter Road was a dirt dead end with three houses on it.  The road is still dirt but quite passable all the way through and has many, many more houses on it.

I can’t imagine what my grandparents, on both sides, thought when they saw this.  My parents had moved from Southbridge, MA where we lived in a new, all electric duplex on Kingsley Street. I was 4, my sister was 2 and my brother a year old. You will notice from the photographs that there wasn’t a foundation (or cellar) under the house, just 4 piles of stone in the corners.

There wasn’t any running water – that pump you see on the right of the photo above was what there was.  We were taught at an early age to make sure the priming pitcher was always left full.  This photograph was also taken from around the front of the outhouse.  Yup, no running water, no toilet, just a two holer out back.  The bonus was the well ran dry every July so my father would take a drum to the town hall and fill it for our water supply.  I remember that drum falling off the back of his truck on a return trip once.  The three of us kids would take our baths in an oval copper wash tub set on the wood floor of the kitchen.  There was an electric “donut” that would heat the water to temperature in the summer, otherwise is was heated on the wood cookstove in the kitchen. My mother did her laundry in the same copper on the top of the stove, hanging it out to dry in back of the house.

We all lived on the first floor initially.  My sister, brother and I were in the front bedroom – bunkbeds, a crib and two dressers – just enough room to walk through.  A few years later they would renovate the upstairs giving us two additional bedrooms but initially there were more important tasks at hand.

The cellar was dug from underneath the house with shovels.  The foundation built once dug out. Water had to come into the house at some point.  Heat of some kind had to be put in.  I can’t imagine the kind of to do list they had from the moment they closed on this property.  They had 6 months to get what was a summer place ready for year round occupancy. They had a vision. They could see the potential.

The house was sold in 1967 when we moved into the house on Fort Pelham Farm.  It was a much different place than the one they had purchased 6 years before. My father and his father built a large garage attached to the house with a breezeway.  And old building was moved from another part of town to be used as a barn for our various animals. We dug up a maple tree in the woods, as a family, and planted it in the front yard.

All of the work that was done was done by my father and his father except for putting in the well.  We learned at an early age the value of hard work.  We saw what it meant to have a vision – to see the potential in things that are not always so pretty.  We learned to make due with what was at hand and to be able to build or repair things with what was readily available. Over a short period of time they turned a sow’s ear into a silk purse.

5 thoughts on “What Were They Thinking?!?”