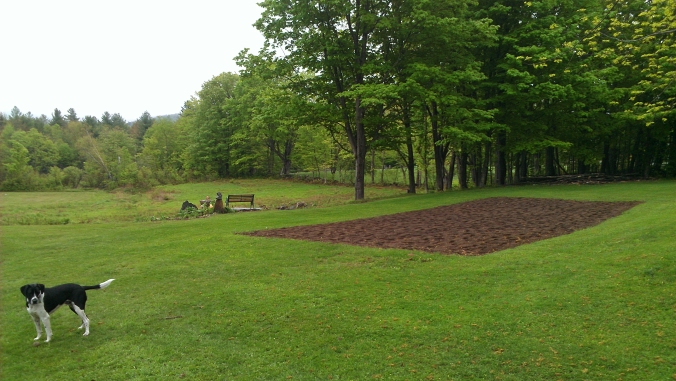 This past weekend was a rather productive one considering it rained most of Sunday.  I made my way to the Shelburne Farm and Garden early on Saturday morning picking up a few plants, mostly for the newer perennial garden.  I completely weeded out the raspberries and the garlic patches plus planting all of my new plants by noon.  The dock growing in every bed is beginning to get to me since I have to use a shovel to get each one out.  The roots are all about a foot long now.  Dandelions everywhere, but when there are so many of them it’s rather pretty.

Cleomes were planted in the perennial bed, my all time favorite annual.  The garden center had some nice ones so I planted them in with the Echinacea .  I was disappointed with things not coming up but I think I’ve just been impatient.  Everything in the perennial beds is up as I remembered it being planted and it’s beginning to fill in.  I have been checking for the jack-in-a-pulpits on the north side of the house for a couple of weeks now and hadn’t seen them until yesterday.  They have been there the entire time we’ve been at the house so I would be disappointed if they were gone.

I bought an eggplant because I had never even seen one grown before last summer.  It’s been planted in a flower bed.  I will be putting asparagus into the north end of the vegetable garden this year, probably planting it on Wednesday.  I either had to plant it there or start an entirely new bed.  I couldn’t figure out where to put a new bed and figured committing space in the garden for the asparagus was worthwhile (it’s a 20 year commitment).  I’ll just have to till the rest of the garden with that in mind.

I tilled the garden on Sunday morning in between a couple of showers and swarms of black flies.  I had to get it done.  I also did a little soil test to see where the ph was and was pleased to see it was in a tolerable range.  I’d been worried that I was trying to grow plants that were just too unhappy with the soil conditions but it would appear that things are much better than I had thought.  I’ll hit it with some composted manure before I plant and continue rotating my plants every year.  Rotation works well for me because I bore so easily, each year feels like a new garden (well it is but I try to make the layout completely different).  Last year I had mostly rows going east/west, this year I will probably have more of a potager type.  The new, experimental crops will be a dwarf popcorn and some purple string beans.  For pole beans this year I will be interspersing Scarlet Runners with Kentucky Wonder I think.  I love the flowers and so do the birds, bees and hummingbird moths. Sharing my garden with these creatures is really what it’s all about for me.  Of course ask me again right after the raccoons destroy my corn.  Still unsure if I will do teepees for the pole beans or do a long trellis like I did a few years ago.  I will have to see what kind of saplings I can find in the woods.

The only things that will planted in the next week or so will be the asparagus, potatoes and onions.  Everything else will wait until the weekend of June 1st.  I’m always so over-anxious to get things into the ground I often put seeds in earth that is just too cold.  One more week won’t make that much of a difference.  I will be starting basil and nasturtiums in pots to scatter around the gardens.  I usually plant the nasturtiums in the garden but have found that they are difficult to weed around as they get going and they look great cascading over the sides of pedestal pots.

The photograph really makes my garden look rather small, in reality it is about 20′ x 50′, so it’s a pretty good size.  I haven’t put up the fence posts yet for my caution tape fence.  Chester spent a good deal of time yesterday in that fine tilled soil – he loves it.  You can imagine what he looked like after rolling around in it while it was raining.  And once again he has photobombed my pictures – he sincerely thinks he should be in every shot.