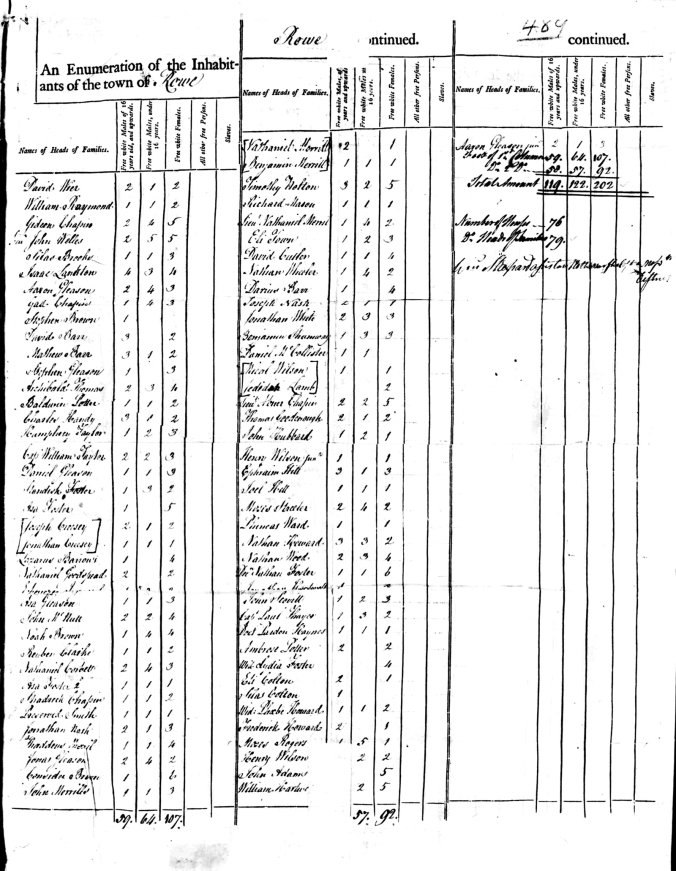 One of the projects that has been in the works for Fort Pelham Farm is a family history of the residents of the property.  One of the most valuable records is the U.S. Census.  I always hear people complain about having to fill out their census forms but they don’t realize what an amazing record they are leaving behind.  The 1790 census for the town of Rowe shows that Dr. Pardon Haynes was living in Rowe with an adult female and a male under the age of 16.  We can fairly safely assume that the adult female was Hannah, his wife.  We don’t know who the male under 16 was since Dr. Haynes’ first child wasn’t born until 1791.  It could have been a sibling or a hired hand but chances are we will never know.

The record also gives us a clue about the size of the town of Rowe at the time.  There was a total of 202 people enumerated in 1790, not a lot but more than a few.  According to the Massachusetts Historic Commission report published in 1982 the “Rowe population grew by 61.6 percent between 1790 and 1830, peaking in 1820 at 851 persons. Much of this growth, amounting to 46 percent, occurred in the decade 1800-1810”.  The economic base of the town at that time was “predominately agricultural with a small saw and grist mills established along Pelham Brook. A small tannery was established by 1800, followed by a fulling mill in 1808. During the War of 1812, Erastus and Moses Gleason enlarged the mill with the addition of 60 spindles for the manufacture of satinet”.   One of the important textile manufactures of New England in the early industrial period was satinet, a satin-like fabric made largely from cotton.  This shows that there was quite a bit of commerce happening all around Rowe at the time.  The cotton was coming up from the south by horse and wagon since it would be a while before the railroad was built.

Rowe was growing at a rapid pace beginning when Pardon Haynes built the house on Middletown Hill Rd.  We have to believe he spent little time at home because he was riding from patient to patient.  The more the population grew the busier he was.  Meanwhile wife Hannah was at home with their growing brood.  The Vital Records of Rowe show that they had 10 children from 1791 to 1814. 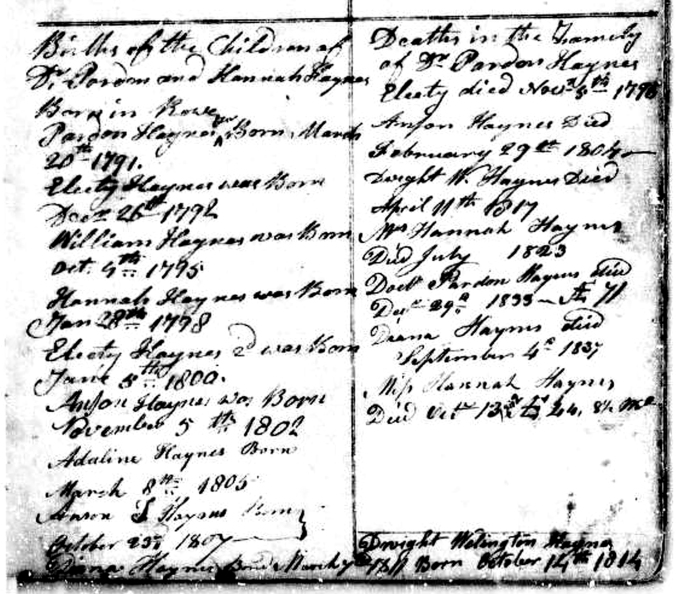 This record is the handwritten vital statistics of Rowe.

With just these two records we begin to get a small glimpse of what may have been happening in the house.   Oral history has it that when Pardon and Hannah Haynes moved onto the land on Middletown Hill in 1790 they were living in what is now the ell.  Dr. Haynes’s number of patients grew along with the members of his family.  By 1800, when the big house was build they already had 4 children.  Pardon Haynes also built an office for himself in one of the front rooms.  The fine details in the woodwork tell us the importance of that particular room.   With the house where it is located it was just down the hill from what was originally the town center where the first meeting house was erected in 1770.  From other records we know that Pardon Haynes was actively involved in town politics, serving as selectman for a couple of years and was actively involved in the church. 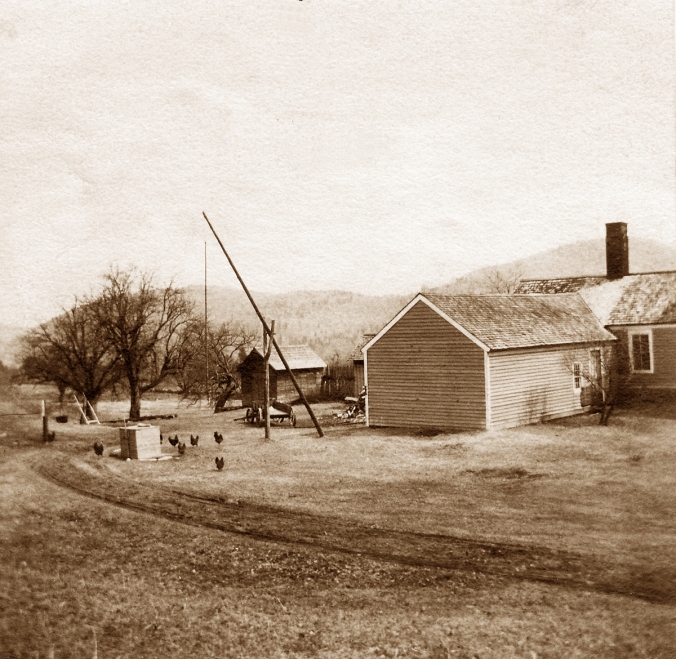 Next we will look into what life may have been like in the early 1800’s and what it’s like now trying to restore some of the property.