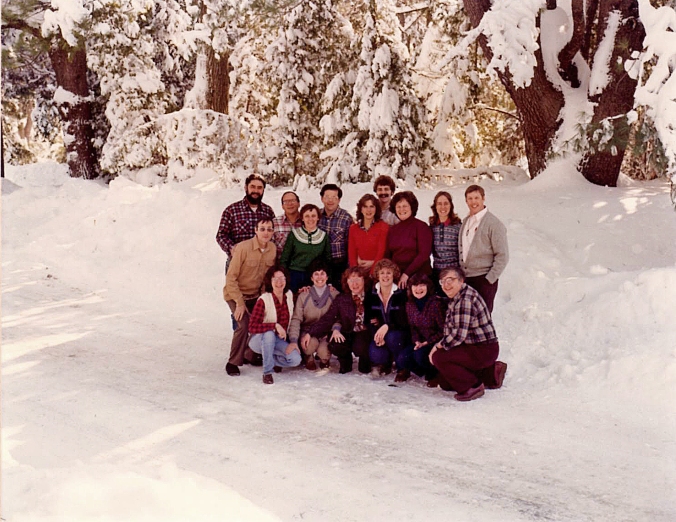 This is a photograph taken in 1981 of a group of people who had traveled across the state of MA to a winter retreat at a monastary, I’m the first on the left in the front row.  I can’t recollect exactly where it was.  I do remember the snowstorm that ensued while we were there and the extraordinary beauty of the entire weekend.  This is a group of people I loved with all of my heart, each and every one of them, with their personal quirks and issues.  They came from all walks of life, all religions.  Some I worked with, some I knew from school, others I knew from the town I lived in or the church I attended at the time.  We were a close knit group that held each other up when times were bad and rejoiced when things were good.  Each little triumph was celebrated. When I married and moved away from this community I remained in touch with some of them over the years, many only a yearly update or phone call.  They were an integral part of who I am, each one a small piece of my heart.

Last year we had a reunion of sorts.  It had been almost 27 years since I had been with these people but was like I had never left in some respects.  A couple, who I was probably closest to had passed away in that time and for me it was a huge loss – both when I had learned of their passing and when the group got together and they were no longer there.  Today I learned of the passing of another and it saddened me so.

Twenty seven years – yet it feels like no more than a year.  Everyone goes on with their lives as I did with mine yet I can only think of them the way I left them.  Even in reunion last summer the only things that seemed to change for me was the color of the hair and the ones that were missing.  I think that’s a trick our minds play on us.  We leave people for years and think they will be the same when we see them again, their children forever 7 years old.  We are shocked to find out the kids are married with children of their own – “How did that happen?!?”  Yet we know how we have changed, how our lives have moved through the years and I suppose in some sense we think they will know when we see them.

Time passes so quickly, the older I am the faster it goes.  People pass in and out of our lives all leaving a little bit of themselves in who we are.  I am beginning to understand what my grandmother meant when she told me that she was all alone.  All of her contemporaries were gone, no siblings, no friends, no spouse.  She had her children and grand children but it wasn’t enough really.

I think at some point you have to take an inventory of sorts, of the people that mean something to you.  Make an effort to contact them in some way, to let them know they are special to you.  It will be good for you and good for them.