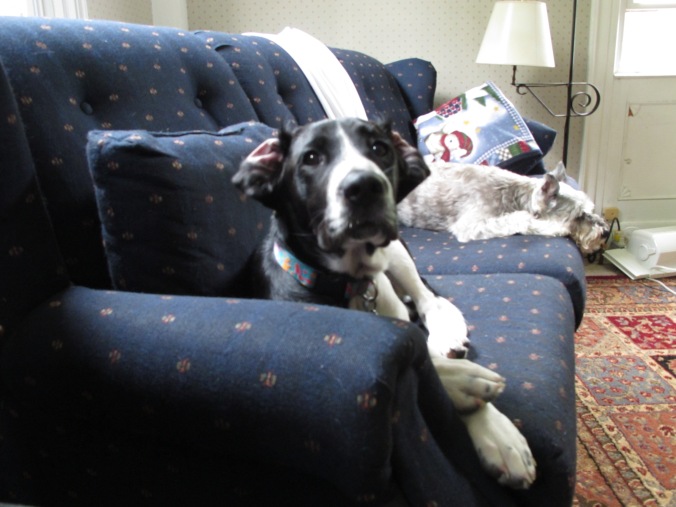 When Chester moved in with us he insinuated himself into every aspect of our lives.  Dogs are good at that, especially young dogs.  Chester was different in he honestly was the best behaved puppy I have ever owned.  I was fully prepared to take him off leash and have him take off into the woods and not see him for a couple of hours.  It didn’t happen.  He loves his people.  He made friends with the dogs at the houses on either side of us.  Jolie (his girlfriend) never leaves her yard.  The dogs on the other side of us have an invisible fence.  The bonus in this situation is that he never learned that he could run away, although I’m not sure he ever would.

Chester does have some true abandonment issues.  For the first year we could not leave him in a crate.  All of our dogs are trained to a crate, they sleep in them at night, in our bedroom.  They love their crates, it’s a safe spot for them.  It took a couple of weeks just to get Chester to go into a crate, a few more until he stopped crying.  If we left him alone in the room in his crate he lost his mind.  Consequently he went EVERYWHERE with me.  He became our shop dog at L&S Automotive.

We put a gate up in my office space, got another crate with a cushy bed and brought him to work with us every day.  I would take him to the park a couple of miles away to run him mid afternoon and then he would nap.  In the photo he is lying with Malcolm, Amanda’s dog.  They have a love hate relationship to this day – in this particular photo they love each other.  I can gladly say that after a year and a half he is a little better adjusted to being left alone although you can see his anxiety level go up as you’re heading for the door.  He would sit in the car and happily wait for me all day if he had too, just because he knows he’s with me and hasn’t been left.

An interesting thing has happened with Chester at the shop.  He has become our official greeter.  He loves everyone (especially kids) and waits in the waiting area for people to come in.  I know he has shown more than one person that dogs don’t have to be scary.  He also has built quite a fan club, there are days when you’d swear that’s what he’s doing, building a fan club.  We have customers and parts delivery people that call to see how he is, that bring him treats, that play fetch with him out in back of the building while their cars are being repaired.  There are people that drop their keys in the drop box in an envelope with dog biscuits.  He’s added another dimension to customer service.

After a year and a half he has settled in and now takes advantage of as many situations as he can.  He’s a sofa dog but there has always been furniture he’s not allowed on.  Well, most of the time.