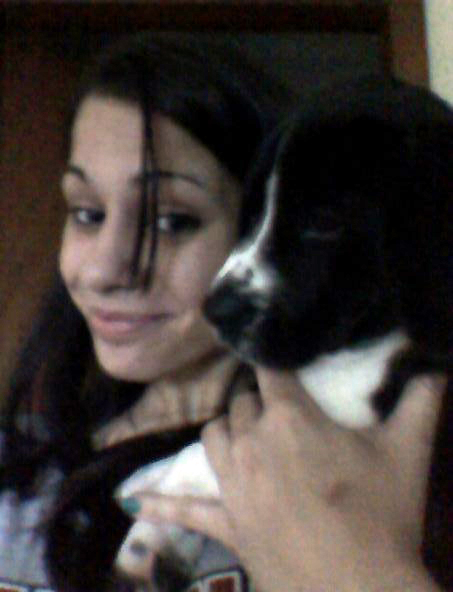 Chester came to us in a rather round about way.  Yes, we adopted him but we didn’t go to a shelter or read about him in the paper.  We took him because Nadia ( in the photograph) couldn’t keep him anymore.  I asked her to tell me about Chester so it could be the beginning of his story.

Nadia picked up Oreo (his name then) on June 24, 2011 after seeing his photograph in a Craigslist listing for northern VT.  The people that had him were about to move and couldn’t take him with them. When Nadia called them they told her they were leaving that day and they were just going to leave him at the house they were moving out of.

They were abandoning him.

Nadia arrived at their house as they were leaving with their Uhaul. She brought him home to live with her and her then boyfriend.  She loved him, he was her baby.  How could you not? 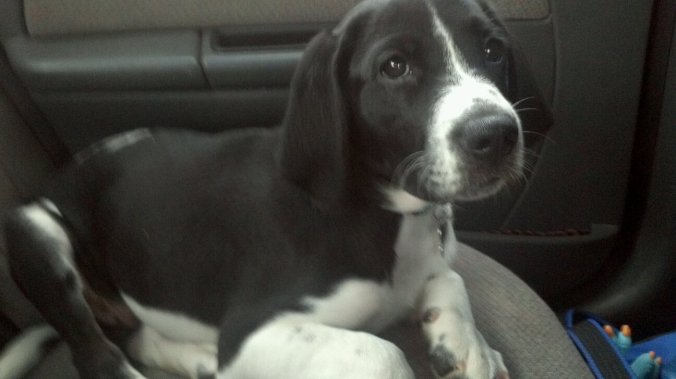 I first heard about this puppy in July.  Daughter Amanda and her boyfriend, Yusuf were wondering about the wisdom of getting a puppy when you’re starting college in the fall.  Nadia is Yusuf’s sister. Towards the middle of August I got a text from Amanda telling me that Oreo needed a forever home and did I know anyone that would take him?

Nadia had had a falling out with her boyfriend and came to stay with Amanda and Yusuf with the pup in tow.  At some point she decided she was going back but couldn’t bring the dog and wanted to make sure he went to a good home.  She really didn’t want to let go but I think she was trying to protect him from an abusive situation, I don’t know, we haven’t talked about it. 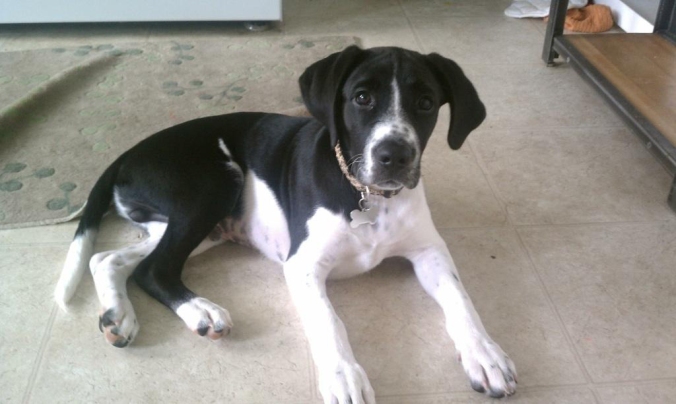 Amanda sent me this photograph on her phone with the message, “Isn’t he cute?”.

On August 13 we went boating with Amanda and Nadia who brought Oreo so we could meet him.  That night Bill and I talked about how much we like this dog.  He was the perfect size and was very sweet but . . . we had two other dogs, did we really want to contribute to the madness we already had?

On August 19th we brought him home.

I’ve had dogs for over 30 years, only one other did I rescue and I lived to regret it.  I believe that every animal comes to us for a reason, they have a job to do although we are never privy to what that is.  Chester moved through two lives before he came to us.  I honestly think he came to Nadia to force her onto another path.

He still loves Nadia.  She came to dinner for Thanksgiving this year.  Chester was pretty excited about all of the company in the house and all of the potential ball throwers that were gathered in one spot so he didn’t really notice Nadia right away.  When he did he practically leaped into her lap wagging his tail in a frantic, crazy way and licked her face.  He was soooooo happy to see her.

It always amazes me that they remember so much.  I think we dismiss them too readily, we don’t give them credit for how deeply they feel things.  People write them off as “just” a dog.  I think in some respects they carry around as much baggage as we do but they are much more willing to move on and away from the ills that have befallen them in the past.  In some respects they are quite simple, if you love them they will love you back.  I have found that just loving a dog can help change a lot of bad things.  I think we can all learn a lesson from this behavior.  Live for right now, the past made you somewhat who you are but the present can be what you make of it – let the crap go.