It’s been a hectic few months so I’ll post some
photos of what has occurred in the ongoing project
that is the house at Fort Pelham Farm.

This is the plumbing wall with everything out of it.
A serious hodgepodge of plumbing materials.

Once the old floor was removed we used a lazer level
to see what we were dealing with.  One corner was 6 inches
lower than the other.  Russell made giant shims for us to
level the new floor.

Mike and Bill put in the special MDF for the floor.  It’s tongue and
groove and gauranteed for 50 years.  Cool.

The studs went up and after a lot of
discussion the half wall was built. 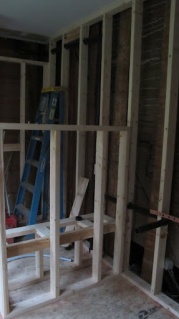 The seat for the shower was built into the
half wall.

Sweet.
During the week the plumbers came in and
put in new plumbing for the entire upstairs and
a new hot water holding tank so we would have
steadier water temps (and not run out of hot water
half way through a shower). 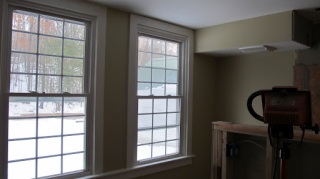 Mike redid the windows, insulated, drywalled and painted
the walls so we could start on the tile.

The schluter membrane goes up.

These are Italian ceramic tiles.  They are very, very durable.

While Bill was tiling I was designing the sink area.

Bill gets to the design courses.  He curses me for
not just using straight tiles. 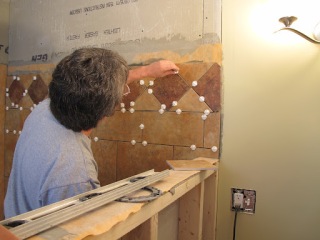 Lots of cutting and placement is slow.

But look at how beautiful it is. 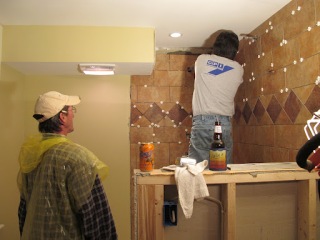 Mike came over to give Bill words of encouragement.
At this point he needs it – he’s making himself crazy with
his perfectionism.

Done for the weekend.

Next Bill has Paul help him lay out the heat mat for the floor.
That’s right – radiant heat.