It was moving day for Shirley and the walking wheel.  We’ve had these pieces of equipment in our living space for quite some time and moving them out today was quite the change.  There are now big swaths of open space (and endless amounts of dust).

I have finished the bulletin on Rowe’s textile history (a short course) for the Historical Society.  I had to write it in such a way that a layman could understand what I was talking about and keep it brief enough so people wouldn’t fall asleep as they were reading it.  No easy feat for someone who could talk about this until you pass out from boredom.

I had researched this from the 1780’s until 1900 or so in detail, the problem came when I had to put all of the research together.  There was the history of the equipment, the economic history, and the social history.  I had thought that the weaving history would be the fascinating part but found it was the people.  When I wrapped up the writing of the article I realized I wasn’t ready to let go of them, or their way of life.

I have found wonderful diaries, day books, account books from the doctors in town as well as merchant’s account records.  The beauty of this research is that it is in a town that is so small.  I built genealogies of over a dozen families and found out how intertwined everyone was.  With the diaries I learned about how stoic the men could be even in facing the loss of their spouses or children.  One line described what one could only imagine as something completely  life altering.  These books all crossed with each other over a certain number of years so it gave a fuller picture of daily living.  The only way that this could possibly be shared is if I wrote a historical novel.  A Peyton Place sort of thing using the characters in their own time and place.  On the back burner that goes.

With the research and writing done the displays are now being put together.  The Rowe Historical Society will be opening an annex to their museum on July 15th.  It is in an old factory building that was moved and restored for the U.S. bicentennial in 1976.  The building is wonderful and perfect for the large sleighs, wagons and agricultural artifacts.  The trustees are working hard to get the museum in good shape for their opening July 1st.   Having done the bulletin on weaving I decided that I would move the barn frame loom and the walking wheel in for the season and do demonstrations on the Saturdays we are open.  It’s nice to be a part of something that is so interesting and to watch and help it come together.

For the time being I will have to get used to the vacant spaces in the house but I have a feeling I will be seeing more of them in the next few weeks than I have been seeing them at home of late.  I will also finally get a warp on Shirley and run her through her paces. I feel good that this is where Shirley needs to be right now, spotlighting how amazing she was almost 200 years ago.  She’ll be teaching me right along with everyone that visits.

One of the best things I have done in the past year is become a trustee for the Rowe Historical Society.  I’m now one of the few that remember its founders and the excitement of putting the museum together and having tours conducted by them when I was a child.

Last summer the trustees had to move an entire room of things in order to do some repairs and refinish said room.  While doing so we cataloged the things that were in there.  It was a real hodge-podge of articles from large farm equipment to cameras to kitchen utensils.  As we were cataloging we moved many things to other parts of the museum that were more directly related to what they were.  I was cataloging a box of smalls when I found a 3″x 4″ printing block with the name Franklin Manufacturing Company  on it.

What caught my eye was the line “superior fabric, colour and finish”.  That’s when I knew it had to have come from the Satinet Factory that was in town during the 1800’s.  I brought the block to a friend, then a friend of a friend who teaches printing made a few copies of what I imagine was a tag of sorts for the fabric woven since No. Yds. is at the bottom of the print. 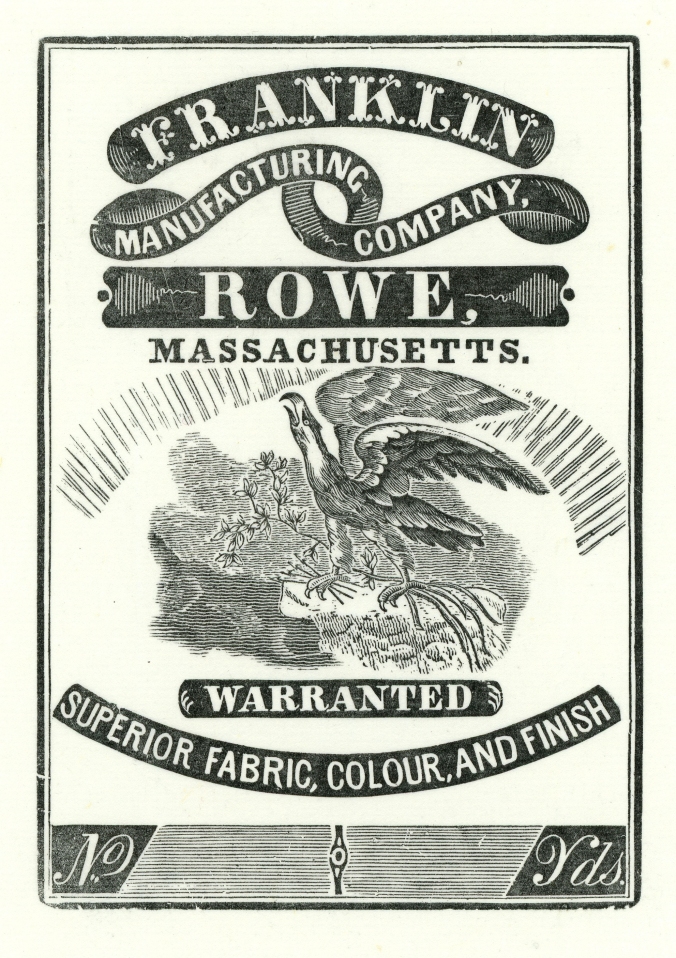 The print is beautiful.

I am currently working on the yearly bulletin for the Historical Society.  It usually has a little story about some interesting thing in town history and maybe a genealogy or story about the occupants of a particular house.  I originally chose the really broad subject of manufacturing but with the continued study of this print and what it meant I realized that what I knew about the Satinet Factory was limited and had seriously peaked my interest.

The last month or so has seen an immersion into the manufacture of satinet and textile mills in Western MA during the early 19th century.  Textile history is American history, it played huge roles in the American Revolution and the Civil War.

Now being a hand weaver and reading more and more about this particular cloth I decided it was something I needed to weave to get a perspective on what it is since I have yet to find any of it to look at (the search continues at the museum though).  Satinet is a fabric woven with a cotton warp and wool weft.  It was produced at an inexpensive cloth used in coats, uniforms and trousers. There are a few weavers that out there that have been more than helpful in this little quest and hopefully in the next few days I will put a warp on my loom to do a little sampling (something I never do but curiosity has gotten the better of me).

I’ve found a few photographs of the factory building after it had been abandoned (1876) and have looked at the location (under feet of snow).  I also read about “Factory Village” as the center of town was known at the time.  The Satinet factory was the single largest economic enterprise that has ever existed in this town yet it seems to be a footnote in the town history and I think that’s because no one really knew what satinet was and how it fit into the scheme of the local and state economies.

I could go on and on about this but there isn’t room (and I dare say interest).  What began as a small article could very well turn into something much larger with a little more digging.  There is an amazing textile history right here and I’m just beginning to piece the artifacts together with the research.  Thank goodness for the internet but at the same time I feel like it’s the technology that keeps people from becoming interested in the things that are right under their noses.  Maybe I can do a little to change that.