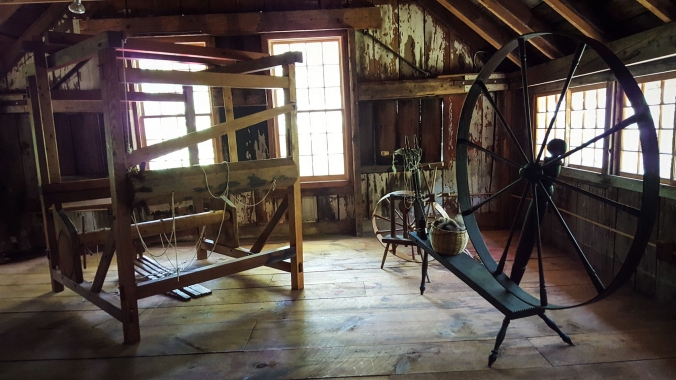 It was moving day for Shirley and the walking wheel.  We’ve had these pieces of equipment in our living space for quite some time and moving them out today was quite the change.  There are now big swaths of open space (and endless amounts of dust).

I have finished the bulletin on Rowe’s textile history (a short course) for the Historical Society.  I had to write it in such a way that a layman could understand what I was talking about and keep it brief enough so people wouldn’t fall asleep as they were reading it.  No easy feat for someone who could talk about this until you pass out from boredom.

I had researched this from the 1780’s until 1900 or so in detail, the problem came when I had to put all of the research together.  There was the history of the equipment, the economic history, and the social history.  I had thought that the weaving history would be the fascinating part but found it was the people.  When I wrapped up the writing of the article I realized I wasn’t ready to let go of them, or their way of life.

I have found wonderful diaries, day books, account books from the doctors in town as well as merchant’s account records.  The beauty of this research is that it is in a town that is so small.  I built genealogies of over a dozen families and found out how intertwined everyone was.  With the diaries I learned about how stoic the men could be even in facing the loss of their spouses or children.  One line described what one could only imagine as something completely  life altering.  These books all crossed with each other over a certain number of years so it gave a fuller picture of daily living.  The only way that this could possibly be shared is if I wrote a historical novel.  A Peyton Place sort of thing using the characters in their own time and place.  On the back burner that goes.

With the research and writing done the displays are now being put together.  The Rowe Historical Society will be opening an annex to their museum on July 15th.  It is in an old factory building that was moved and restored for the U.S. bicentennial in 1976.  The building is wonderful and perfect for the large sleighs, wagons and agricultural artifacts.  The trustees are working hard to get the museum in good shape for their opening July 1st.   Having done the bulletin on weaving I decided that I would move the barn frame loom and the walking wheel in for the season and do demonstrations on the Saturdays we are open.  It’s nice to be a part of something that is so interesting and to watch and help it come together.

For the time being I will have to get used to the vacant spaces in the house but I have a feeling I will be seeing more of them in the next few weeks than I have been seeing them at home of late.  I will also finally get a warp on Shirley and run her through her paces. I feel good that this is where Shirley needs to be right now, spotlighting how amazing she was almost 200 years ago.  She’ll be teaching me right along with everyone that visits.

For as many years as eBay has been in existence I have been bidding on and purchasing old process photographs with children and dogs.  In recent years these have become a little too pricey for me to win often.  The photograph above is one I recently purchased for a very decent price.  It’s an ambrotype in a pristine Union case.  In the case was a slip of paper that read Myrta Hill and Mrs. R. E. Smith, woohoo!  For me this is the holy grail of photography finds.  I can match the photograph with a family.  After a brief search on Ancestry I found Myrta’s family and was able to contact the owner of their family tree and send them a copy of the photograph.

I love it when that happens.  I love the investigative work that goes into this and I am all too familiar with the feeling of seeing new old photographs of relatives.  Being online with the genealogy community has given me so many opportunities to communicate with relatives that I had no idea existed.  They all are similar minded and very open to sharing what they have.  There have been instances where I have met long-lost cousins with photographs in hand and others that have emailed me diary transcripts from the mid to late 1800’s.

In the past few months, with online connections, I have seen photographs of my father as a baby and my grandparents that I have never seen before.  It’s really a wonderful experience.  With this photograph arriving in the mail I was able to share that experience with a total stranger and that is something that makes searching these little treasures out worthwhile.  I often wonder when I buy one of these what happened to the photograph’s family, especially when there isn’t any identifying information with or on the photo.  Because of the time period of my collection we are going back a few generations and in my mind I know that someone’s estate was cleared out and things put up for auction.  Either there were no family members left, they didn’t realize what was in the auctioned items or they didn’t care.  Sad.

I have been the “keeper” of family photographs forever.  Someone’s household is cleaned out the photographs come to me.  I scan them, put them in chronological order and file the originals away.  I currently have thousands of photographs from all branches of my family as well as Bill’s.  The beauty of this is in the sharing.  Being able to show other family members the photographs they have never seen.  Sharing is a little gift on my part but very often it seems like a big gift to the receiver.  I know, being on the receiving end is wonderful.

Posting will be a bit sporadic for another couple of weeks.  I will be packing up all those photographs and moving them to Rowe (hopefully their final home).  No small feat because moving them can be a real distraction.  I have to just move them and not look at them until I have time.  I expect regular postings to resume once I’m there.  Send positive thoughts for a smooth transition!