Saturday morning Bill and I took a ride to Friends of the Sun in Brattleboro, VT to purchase a wood stove for the kitchen.  I had done some pretty extensive research over the past few weeks figuring out what would be the best option for us.  The stove would be mounted on a 9″ raised hearth with the hookup using the fireplace and chimney.  The fireplace, as beautiful as it is, has not been something we can really use for heat, or anything else for that matter.  When my parents had it built in the ’70s the chimney was not built to the same height it was originally.  Any time we used the fireplace we ran the risk of the wind blowing from the west, over the top of the house and directly down the chimney.  I once had to move a blazing fire into another fireplace because the smoke and ash suddenly blew into the kitchen.  Many times I woke up in the morning to a kitchen with everything covered with ash.

We decided on a Hearthstone Hearthmount.  It’s a soapstone stove which is something I have always wanted because of its heat retention properties and its beauty.  When we arrived at Friends of the Sun the stove was sitting right in their showroom and we soon found out they had one in stock.  I had anticipated having to order it so this was a bonus.  Although after a look in the warehouse our salesman told us we would probably have to wait until next week to pick it up because their warehouse guy wasn’t in and it was in an odd location.  He set us up with the materials for the chimney installation and sent us with the owner to pick up what we could. 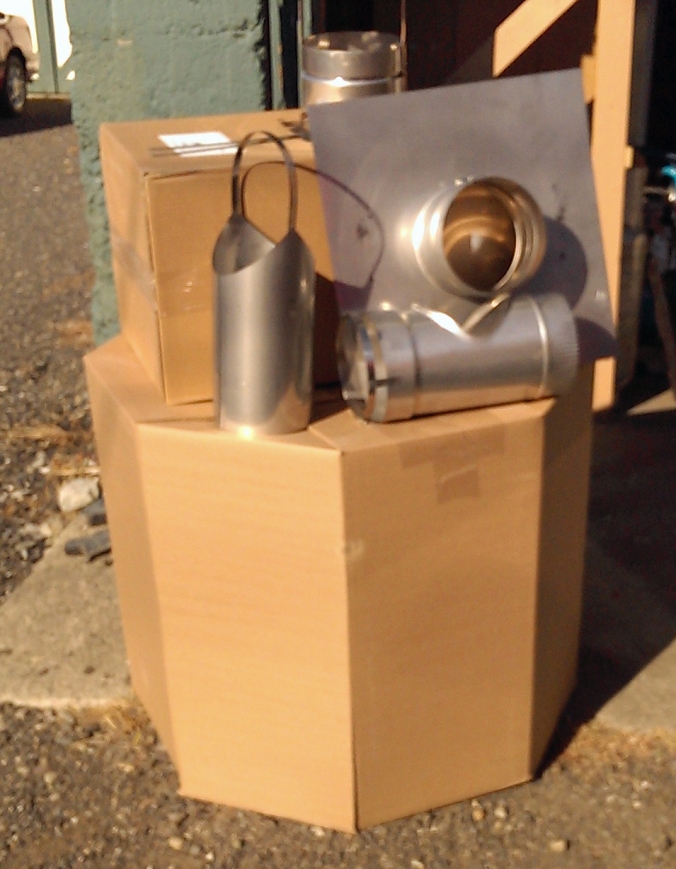 This set up is going to solve a bunch of problems.  It will keep the chimney dry and we will be able to heat the ell with wood.  The box consisted of 25′ of stovepipe, along with insulation and a cap.  It all seems so simple and easy when you are picking up the parts.

I swear the owner of this business is Mr. Rogers incarnate.  If he’d been wearing a cardigan it would have been perfect.  Their warehouse is a small, packed little building a short drive down the road from their showroom.  When we got there Mr. Rogers informed us that he could get the stove out for us if we wanted to take it right then.  Woohoo! 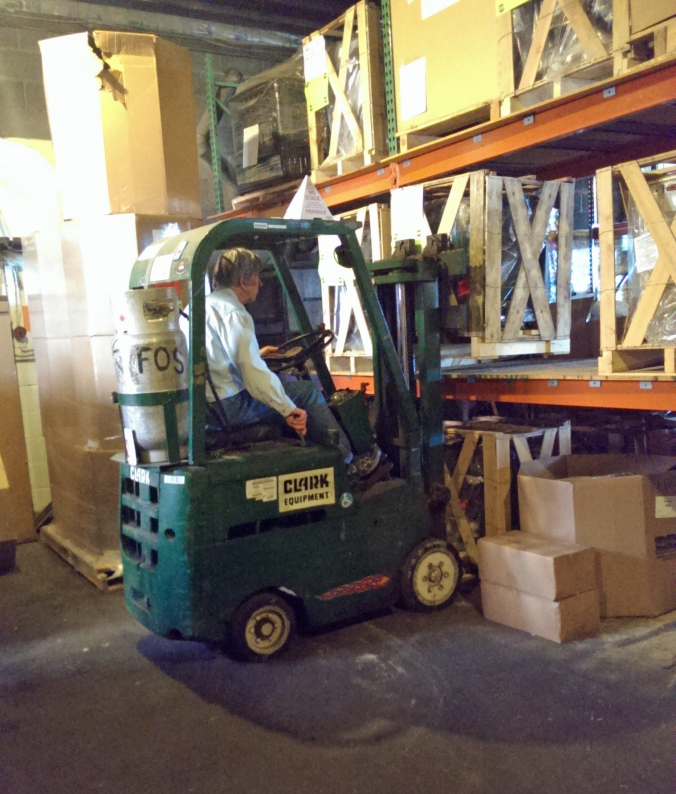 So after moving some things around it was taken off of a rack. . . 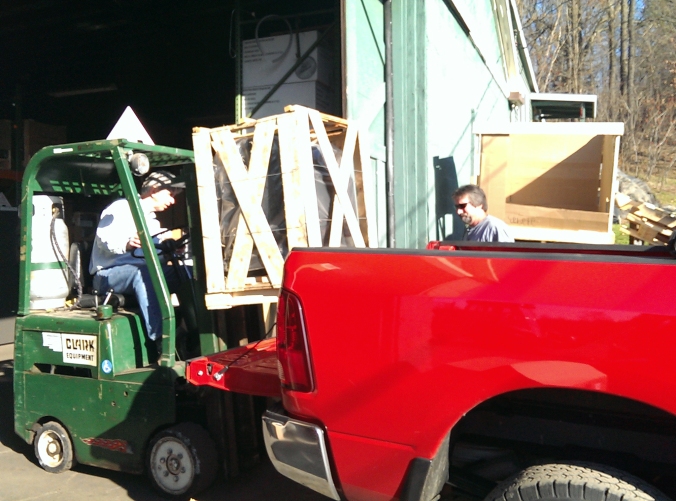 and loaded into the truck.  We tied a couple of things down and made the trip home.  Oh, did I mention that the stove weighs 440 pounds?  Hmmm, think about that for a minute. 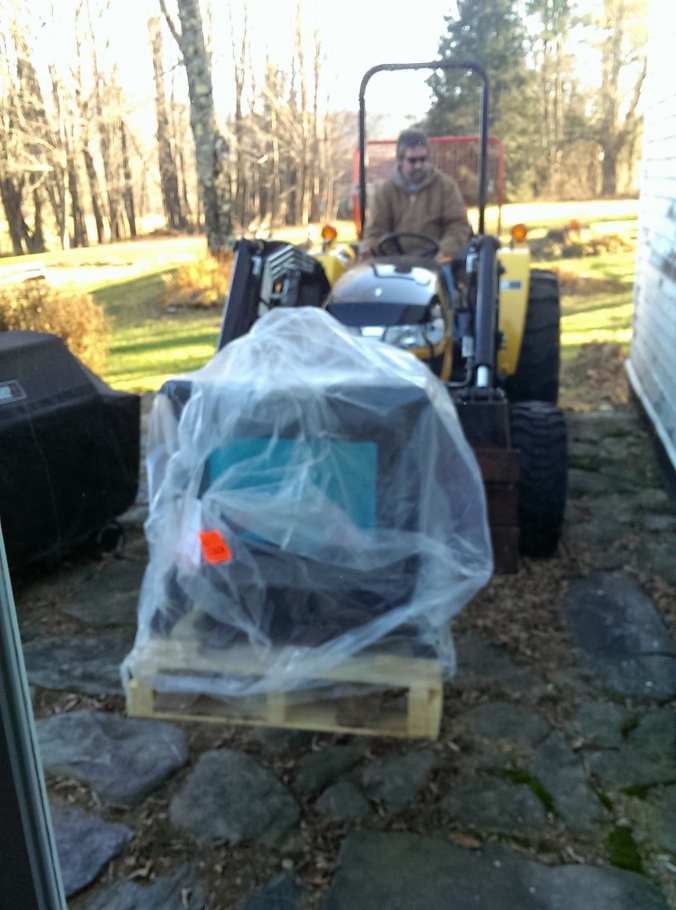 As soon as we got home BIll got the tractor out, took the stove off of the truck and unpacked it except for the pallet it was bolted to.  We decided the only way to get this into the kitchen was through the patio door.  Bill drove right onto the patio and approached the door only to find that it was too wide to fit in the door.  Damn, now what?

We decided to put it in lengthwise but the pallet was too narrow to hold it with any stability on the forks.  We stood in the yard trying to figure out how the two of us were going to get this inside and I just kept thinking WWDD? (what would Dad do).  I remembered there were two dollies in the barn that my father had used to move heavy things around. We got one and put it under the stove pallet, then picked it up. 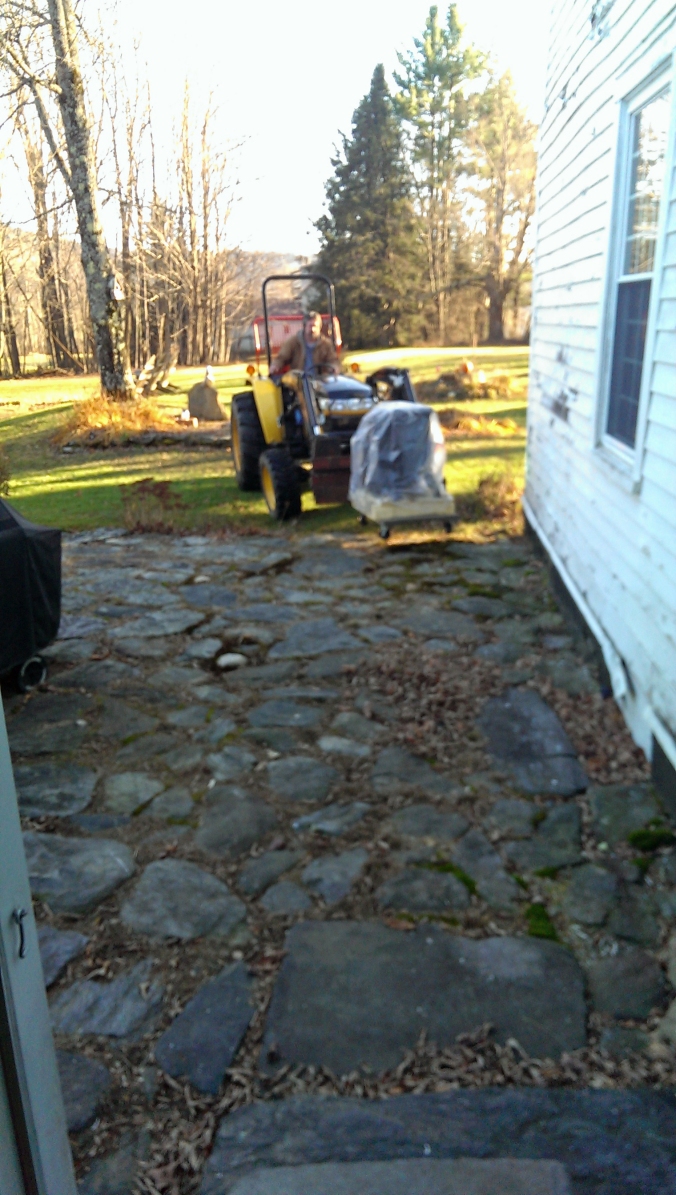 This pic is pretty blurry – probably because I was yelling at Bill while I was taking it.  When you are driving the tractor you have no way of knowing the height of the load you are carrying, especially when it is near the ground.  He came into the edge of the patio a little low and I could just imagine the sound as the stove hit the ground.  We were only able to get close enough to the doorway to set down the first set of wheels on the floor, he tipped up the forks to make it slide the rest of the way off, ran around into the kitchen and the two of us eased it off into the room. 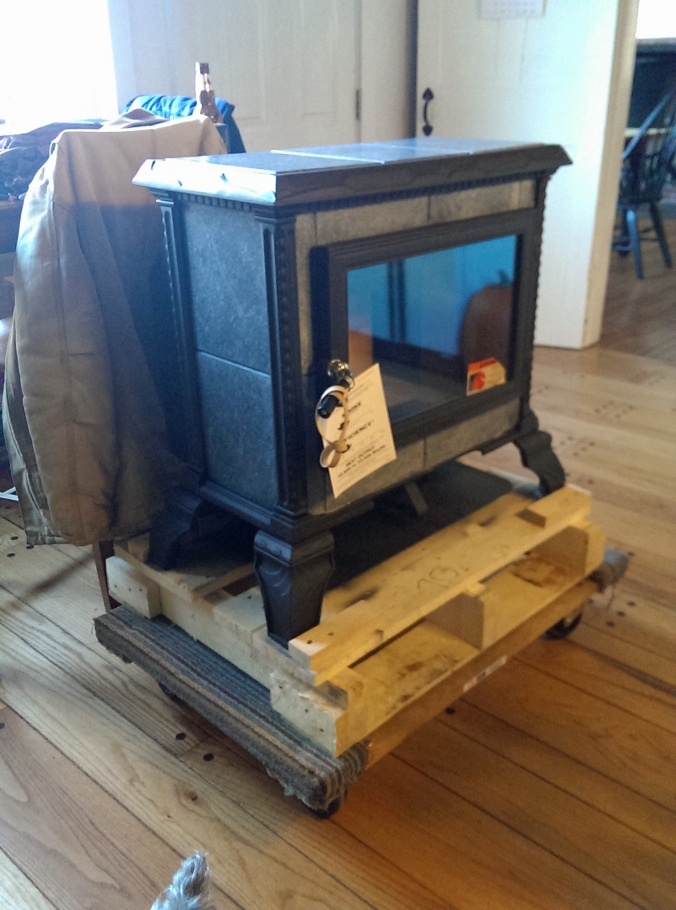 There it is all uncovered waiting for installation.  Honestly, that move took about 6 years off of my life it was so stressful.  Just writing about it raised my blood pressure.  440 pounds is really, really heavy – thank God for Dad’s little trolley (and remembering it was there).  Bill called Mike and made a date for Sunday morning to install it.

The first couple of hours of the installation on Sunday was spent wrapping the 25 feet of stove pipe with insulation and wire mesh.  They then went up on the roof and tried lowering it down the chimney.  Did I mention it was raining and we have a metal roof?  Yeah, even with ladders it was scary.  They were unable to get it up there and drop it down so decided to pull it up from the bottom.  We had been told that we would probably have to flatten some of the piping to go through the damper in the chimney but we were fortunate to have a damper that allowed the pipe to go through as is.  A rope was dropped from the top of the chimney and the pipe was pulled up and attached to the cap.  That was the easy part.

As they began to move the stove Mike told me we really needed four strong men, one for each corner.  We couldn’t think of any other guys to call so it was up to them.  Fortunately the dolly had placed the height of the stove just a little higher than the hearth. 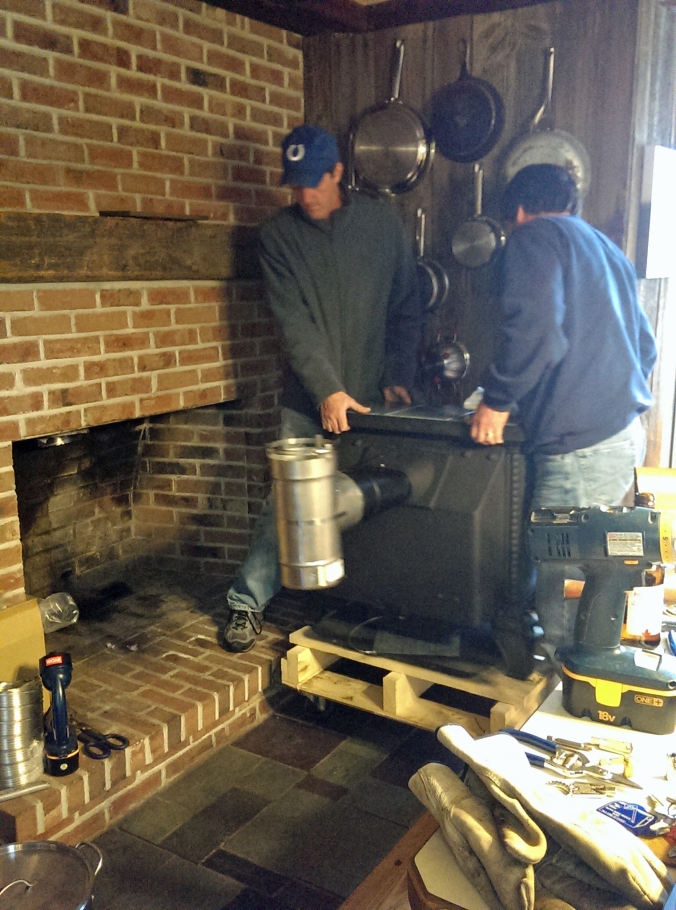 We had to do a lot of lifting and shimming to get this to work.  It had to be “walked” over because they could only lift it a little at a time.  Another stressful little period of time.

Getting all of this to fit together was another challenge.  There was a lot of fabrication going on in the garage and a trip to Wilmington to the hardware store for a piece of stovepipe that would finally enable the hookup.  There was a moment when it looked like this wasn’t going to happen without getting a different part for the back of the stove, a minute when they both walked away.  Some times you need those moments to walk away from a difficult situation to think of it in a different way.

Both guys were determined to build a fire in this before the day was over and figured out a way to connect all of the pipes in a safe way (not without a few more frustrating moments mind you).

At 2:45 Bill told me to light the first fire and this thing is everything I’d hoped it would be and more. In about an hour the temp in the room went from 55 to 76.  Bill thought that was a little too hot, I thought it was just right.  And it’s beautiful to boot. 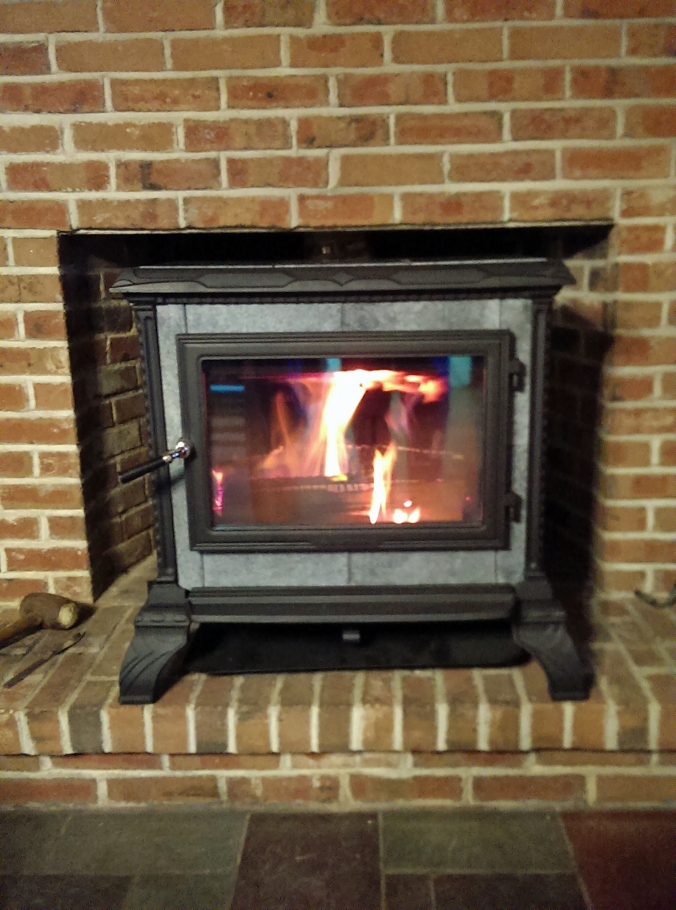 On our way back to Enfield Bill said this was probably the best home improvement we have done.  The heat in the kitchen never turns off once it really gets cold outside.  The stove is designed to have greatly reduced carbon emissions and will stay hot for 12 hours or so.  It should make a big difference in the oil bill.  What really amazed me was how efficient the burn was, once it was started we burned 3 good size pieces of wood in 3 hours and it was still burning when we left.  Sweet.