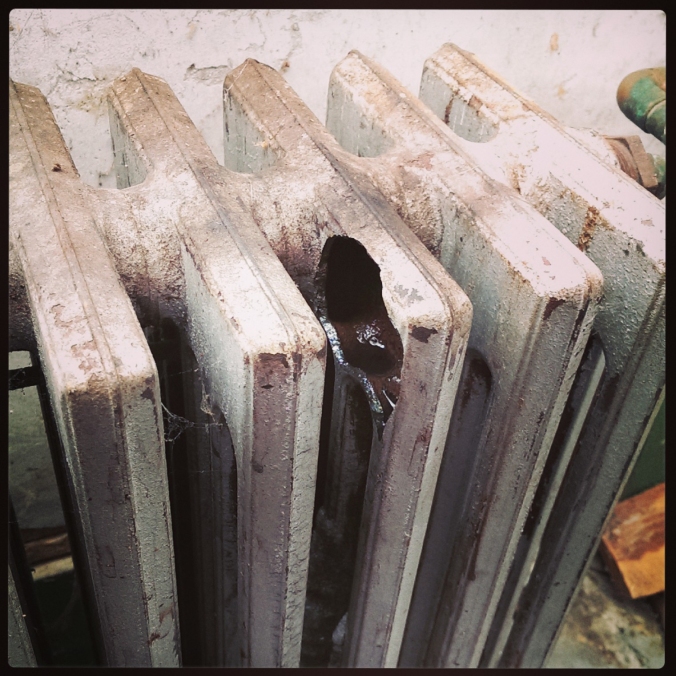 There are decided disadvantages to not living in a house full time.  There are squirrels moving into the shed, spiders just taking over each and every room and pipes freezing during subzero nights.  Yeah, the photo pretty much says it all.

This winter is one that will be burned into memory.  It has been harsh.  The cold has been unrelenting.  The roads are heaved and full of pot holes, the house has heaved enough to cause problems closing outside doors.  The oil truck visits weekly, I swear, and there is no end in sight.  Sigh . . .

The issue with the frozen pipe reared its ugly head on Friday – I came up early to warm the house.  I lit the stove and then looked at the temperature in the room to watch it rise – it was 46 degrees in the room with the thermostat set at 54.  Uh oh.  I turned on the water in the sink – nothing.  Beautiful.  I just cranked up the wood stove thinking that I could at least warm the room enough to thaw out the water.  We have a propane heater that we put in the shop to thaw it out another time and that was turned on once Bill arrived later in the evening.  Then we waited.

Saturday morning in the light of day Bill saw the hole in the radiator and called our heating guy.  He lives in town and probably the sound of desperation in our voice sent him over within an hour.  We had put enough antifreeze into the heating system to keep it liquid to 20 below so this came as somewhat of a surprise to us.  Apparently the pictured radiator had been leaking slowly for that past month or two (maybe longer).  The system has an automatic fill on it so when the liquid gets low it automatically refills it.  Enough had leaked so the water to antifreeze level was lowered considerably and it was diluted enough so on a night where the temperature was -8 and the wind coming out of the north the system froze in a room with little insulation.

The fix was something we had been talking about but had put off thinking the antifreeze was the answer.  We rerouted the circulation to a shorter loop that no longer went to the outer room.  In the long run this appears to have been the best solution, now the heat works much better in the kitchen. Unfortunately it took a lot of worry and angst to get us here.  Now I can check that off of the list.

Here’s the thing, it’s always something.  Each and every week there is some disaster (or impending one) whether it’s winter or any other season of the year.  We are caretakers of two very old houses (the newest one being 175 years old).  Things happen, and they happen regularly.  We signed on to the old house thing a long time ago knowing what we were getting ourselves into.  Plans are made for major repairs but it’s this sort of thing that often supercedes those renovation plans.  You end up doing a lot of seemingly little things because of the immediacy of the situation.

Spring is coming.  Really, it will get here and I have a feeling it will be about two weeks long and we’ll be into summer.  Then we can complain about how hot it is and I’ll be thinking about that insulation that needs to go into all those places before next winter gets here. 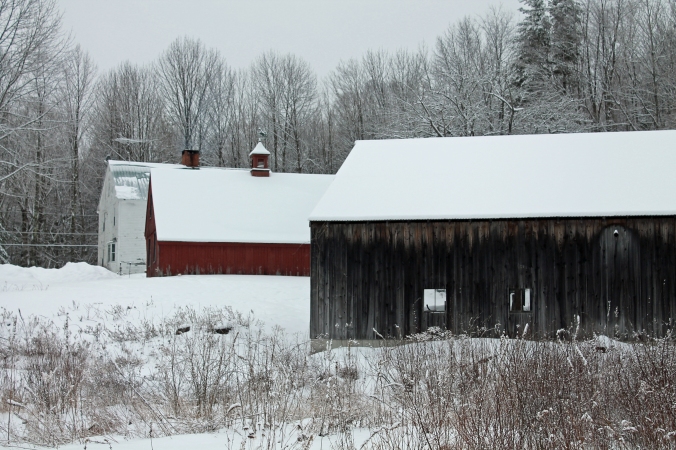 From Saturday into Sunday we had about 12 inches of snow in Rowe.  It was very cold, getting into the single digits overnight so the snow was light and fine. When we arrived on Friday night we cranked up the wood stove to get the chill out and banked it for an overnight burn.  Saturday we went and picked up a few supplies figuring we would be snowed in and then went to Russell and Carmen’s to pick up maple syrup for Christmas presents.  When we arrived we found out the beef had come back from Athol.  Since it was all mixed together and Russell was out showing off the nine-point buck he had shot the night before we knew we would have to come back a little later.

When we returned to the house we worked on a couple of indoor projects waiting to go back and pick up the beef.  Bill turned up the heat in the ell remembering that the antifreeze wasn’t good for the temperatures that we were having outdoors and with the stove going we still needed to have warm water running through the system.  I had to add to the bird feeders outside, make sure everything was full.  The birds know when bad weather is coming so they came in droves to eat.  Later in the afternoon we went back over and picked up around 150 pounds of beef, packaged and frozen.  We checked out the bucks head on its way to taxidermy and talked about where he had taken it and the other 3 that were still out there.  It was beginning to snow as we went back to the house but before we left Bill told Russell he was concerned about pipes freezing with the stove running and not having cranked the heat up overnight.  Russ told us he had a two really large BTU heaters if we ran into trouble.

Well, we ran into trouble.

About 5:00 or so, when the snow was really coming down we realized that the heat wasn’t circulating through the ell zone and that we were going to have to do something or we would be dealing with burst pipes. It was 9 degrees out.  We called Russell again and he drove over and unloaded his heating rig (this was big time – ductwork, heater, exhaust piping, thermostat, yeah).  They ran the heat duct into a back shop and set the thermostat at 70, we kept the heat as hot as we could with the stove and found a couple of fans to circulate it all around the zone.  Russell had dinner waiting for him at home so he gave Bill a little instruction and left.  Bill and I discussed the worst case scenario and the fact that I would have to stay to keep the fire going so the water pipes wouldn’t freeze and deal with having the situation remedied by someone else.  By 10:00 the hot water was flowing and we were breathing a sigh of relief.

With all of the holiday celebrations all around us we sometimes forget that these are the kinds of things that are the best gifts. Having friends that we do so much with and can count on in a near disaster. Bill and I returned the equipment to Russell’s shop yesterday while they were at a holiday party.  On the ride over and back we talked about how important our friendships are in this rural area.  Life is different here.  People drop what they are doing to help out their neighbors and friends.  There seems to be more of an attitude about all being in this life together and many hands make light work.  I felt blessed to have them in my life this past weekend.

The icing on the cake was being able to thank Russell on the phone last night for helping us and his comment was “That’s what we do.”

I still think I need to make him an apple pie.