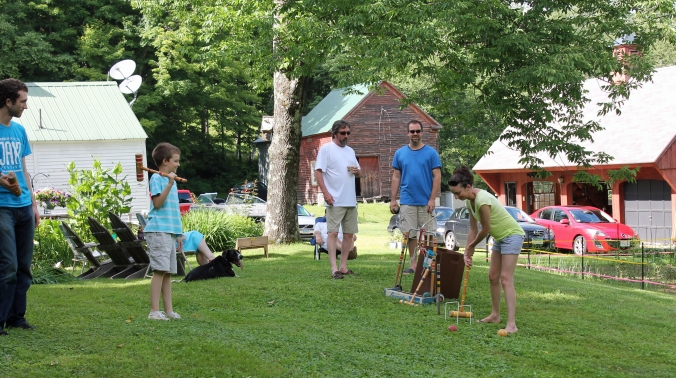 The Fourth dawned hot and humid, with very little breeze.  I wasn’t complaining since it has rained for weeks now – any sun was good.

People began gathering around 2:00.  It was to be one of those days where family members from far and wide come together to enjoy each other’s company.  After sitting in various chairs for a while we decided we needed an activity.  Extreme croquet was the game of choice with two sets of balls and mallets (and the rules be damned).

Everyone was in on the game – photographer, observer, player.  The youngest was concentrating the hardest.

Two teams made their way around the course each starting at their own end pin.  The only place they would meet was the center wicket.

Fully half of the players were learning what scant rules we had as they played.  Some just ecstatic at getting their ball through a wicket (in the right direction).

The course was large with a few obstacles making it challenging for everyone.  People’s balls were sent far from their impending wicket by their competitors.  When you hit an opponents ball you have the choice of taking another turn or hitting the opponent’s ball as far as you can in a different direction.  It seems this ruthless crowd took great joy in causing their opponents suffering.  Mind you this is not a team sport is was every man for himself. 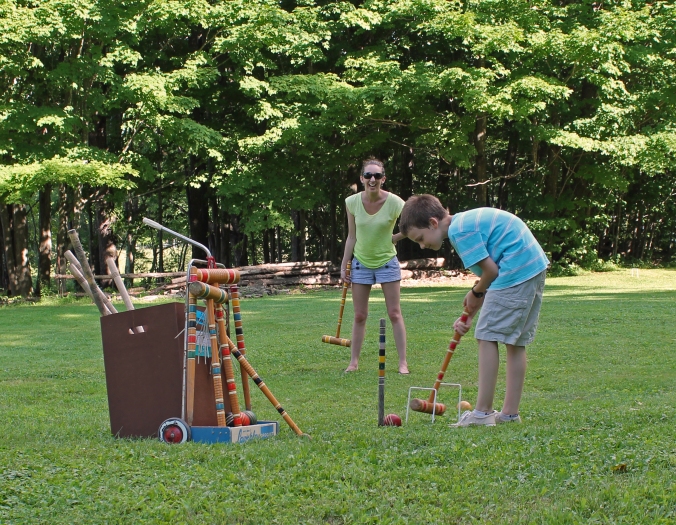 The competition was steep but the game concluded with unexpected winners.

Croquet is a game I have played since childhood.  It seems like such a civilized game at first glance.  We’ve never played by the rules, yesterday we seriously twisted the way it’s normally played to allow as many people to play while moving the game along in a timely fashion. You learn a lot about the people around you when they play a game.  Some are fiercely competitive, some are not the best sports, one with injuries unrelated to the game showed brilliance in form, some have dogged determination.

When the game was over the plays were rehashed by everyone gathered with their Rhuby Rockets.  It really is the perfect game in my mind, especially on a hot July day.